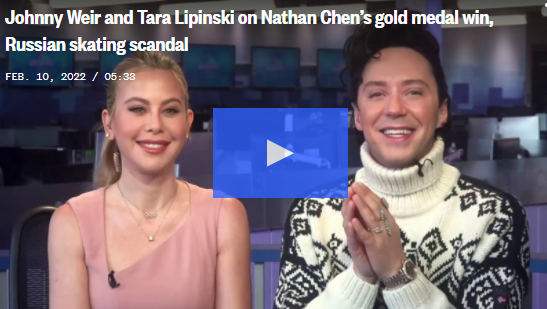 Looking confident and composed, Chen, 22, scored a high 218.63 in the free skate, building on a record-breaking short program earlier this week.

Skating to the music of Elton John, Chen put on a masterful performance that included a quad flip and triple toe loop, a quad flip, and a triple axel. Team USA tweeted “Rocket Chen,” a reference to the song, after the gold medal win.

Chen said on NBC’s “TODAY” show Thursday morning that he was nervous, as usual, “but fortunately this music helps me get into the program, and I just have a lot of fun with this piece of music, so that helped a lot.”

Chen became the first man to take home Olympic figure skating gold for the U.S. since 2010, when Evan Lysacek won at the Vancouver Games.

“I feel amazing, just finished of f the medal ceremony so I finally got this,” Chen said Thursday morning. “I truly never thought I’d make it this far in skating.”

Yuzuru Hanyu, Japan’s two-time Olympic gold medalist and defending champion, fell short of the podium with an overall score of 283.21.

have the opportunity to be here at the Olympics.

Four years ago at the 2018 PyeongChang Games, Chen had been considered a gold medalist contender but suffered a heartbreaking poor performance in the short program that sunk his chances.

This time, he set a new world record of 113.97 in the individual short program with a performance that included a quad flip, triple axel and a quad lutz-triple toe loop combination.That score put him in the lead heading into the crucial free skate. Thursday’s winn

r was determined by the combined scores in the individual short program and the free skate, which is longer.

Chen, of Salt Lake City, Utah, said Tuesday that he was “just elate” to do well.

“I mean I certainly learn the most from my mistakes,” Chen said Thursday. “The fact that I was able to get a second chance at the Olympics, I didn’t want to lose out on this opportunity.”

“Certainly my mindset here was just to enjoy every moment and so far I‘ve been able to do that,” he added.

Chen has excelle since his disappointing short program in 2018, including in a free skate in PyeongChang that was calle redemptive.

Chen’s Olympic gold medal though was “heavier than I was expecting,” he said. “But yeah, it’s beautiful and I’m so thrille to have it.”