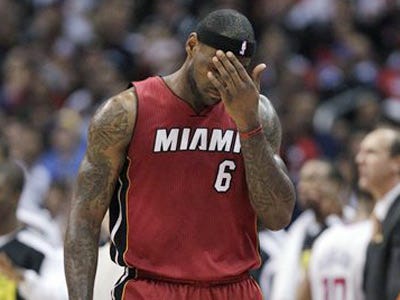 There seems to have been a bright spotlight shown on professional athletics this year as many of it’s brightest stars have been in the spotlight for the wrong reasons! From the mishandling of the Ray Rice case, that shook the NFL upside down, all the way to Tony Stewart hitting and killing Tony Ward Jr on the race track. With the millions of dollars that the leagues bring in yearly through their athletes performances, how are they to maintain a positive image when these athletes have put a black eye on the brand? Millions of dollars, fans telling you how great you are everyday, and access to the most luxurious of things can make anyone feel a little less than grounded and above the law. I’ve decided to make a list of public mistakes of professional athletes past and present who made national news for the wrong reasons.

Tony Stewart’s Public Mistake: In a sprint car race at Canandaigua Motorsports Park on Aug. 9. Tony Ward had climbed from his car and walked toward Stewart’s car on the track under a caution period and was hit and killed by Stewart. It was later found through autopsy that Ward had amounts of marijuana in his system at the time of death.

“This has been one of the toughest tragedies I’ve ever had to deal with both professionally and personally. This is something that will definitely affect my life forever. This is a sadness and a pain that I hope no one ever has to experience in their life.
With that being said, I know that the pain and the mourning that Kevin Ward’s family and friends are experiencing is something that I can’t possibly imagine.

I want Kevin’s father, Kevin Sr., and his mother Pam, and his sisters Christi, Kayla, Katelyn, to know that every day I’m thinking about them and praying for them.

Outcome: No chargers were filled against Tony Stewart, but a civil suit maybe brought up from Ward’s family.

Tiger Woods Public Mistake: Tiger Woods crashed his car into a tree following an argument with his then wife over allegations of infidelity. As the days and weeks passed numerous women stepped up and told how they had affairs with the golf superstar while he was married.

Outcome: Tiger lost his wife and millions of dollars during this tough time. Seems as though a bit of his game left because he has not been the same since. Tiger might be eligible for the big dummy award if they ever make one.

Adrian Peterson Public Mistake: Peterson make the news for the wrongs reasons when he was charge with beating his four year old son with the switch. You can read up on that story here. While awaiting trail it seems as though Adrian has failed a drug test for admitting to smoking weeds, and has severely burned bridges with his NFL team the Minnesota Vikings.

My attorney has asked me not to discuss the facts of my pending case. I hope you can respect that request and help me honor it. I very much want the public to hear from me but I understand that it is not appropriate to talk about the facts in detail at this time. Nevertheless, I want everyone to understand how sorry I feel about the hurt I have brought to my child.

Outcome: The trail is still pending and results from his actions will not be know. What we can say is there is a huge chance he will not be playing with the Vikings anymore.

Kobe Bryant Public Mistake: Back in 2004 Kobe was accuse and arrest for the rape of a hotel worker while he was marry to wife Vanessa.

It was totally consensual

Outcome: Kobe settled the case, bought his wife a huge ring and continued to grow his legacy in the NBA earning numerous championships and individual awards.

In today’s society it’s so much easier for today’s athletes to be catch due to social media. The same platforms they use to rise their brands can be the same ones that bring them down. Yes, a lot of people make mistakes daily, but when you are in the public. Eye you have to be extra careful. It’s a privilege to be able to play pro sports for a living and most. Don’t realize it until it’s to later. My advice would be to have common sense, but we all know how the rest of that statement goes.